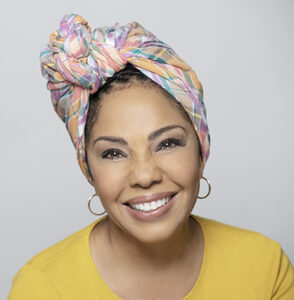 Angela grew up on the beautiful island of St. Croix, U.S. Virgin Islands and is a “daughter of the soil.” In a culture rich in oral tradition, she grew up hearing folktales at family gatherings and grew to love telling stories herself. Her love for bringing stories to life fuels her passion as a writer, transformational speaker and actor. Angela has been entertaining audiences with her acting skills since she was in elementary school and is at home whether on set with cameras, or in front of live audiences.

Angela’s love for cultural preservation, as well as acting, prompted her to write a historical fiction entitled “Fireburn the Screenplay.” This screenplay, published as a book, tells the reader about a history-making event, known as the Fireburn, which took place in post-emancipation Danish West Indies. Angela’s ancestors were participants in this bloody labor revolution and she incorporates her family’s history into the story. “Fireburn the Screenplay” was well received and hit the #1 spot as an Amazon Bestseller in July of 2019. Angela quickly followed with a children’s book “James and the Fireburn,” that presents a strong anti-bullying message and is set against the backdrop of the Fireburn. Her children’s book provides for healing and advocacy as she reads her book to elementary school children and discusses the pain that bullying brought to her family. During her school appearances she shows kids how to be a part of the solution. Angela has also written for the internationally published devotionals, Light from and the Word and Vista.

Two of Angela’s “Sacred Gifts” are encouraging and teaching, so it is no wonder that when she is not on set, Angela can be found creating her own shows that are intended to bring encouragement, share information or simply bring a smile to your face. Angela holds a master’s degree in Counseling Psychology from Chaminade University of Honolulu, a Master of Practical Theology from Wesley Seminary, as well as numerous certifications in human behavior. She is also a certified Raw Food Chef and uses her knowledge to help people incorporate more healthy foods into their existing diets.

“Angela’s wonderful personality, humor and theatrical experience are expressed when she addresses the audience. She has such positive energy and is enjoyable to watch and listen to. She is authentic and fun!”

“Angela is great at getting the audience involved and kept everyone’s attention with her enthusiastic presentation style. She is very animated and entertaining.”

“Awesome job! Angela packs an A+ punch in her dynamic presentation. Be ready to be both educated and entertained as you experience transformation and leave with tools for continued growth.”